A popular and effective way of developing a complex application in a team setting is to make use of git feature branches and submitting a pull request to be merged into the develop branch. Sometimes, though, the pull request can become quite large. This may result in a lengthy wait to get your pull request reviewed, bugs being overlooked, and merge conflicts.

These difficulties can be helped by shrinking your pull requests using the following two strategies:

Shrinking PRs by moving commits aside

Moving a commit aside safely

Here is one way (of many) that you can do it:

This is just one of the ways you can do this. You can also use git reset or git cherry-pick.

If your changes are interspersed with your code, and there isn't just one commit that you can easily pull out, you can extract them to a branch as follows:

These two examples make use of git merge and git rebase, which I will explain in more detail below.

In this example, we created a feature branch and added some commits. In the meantime, three commits have been added to develop since we created our branch: 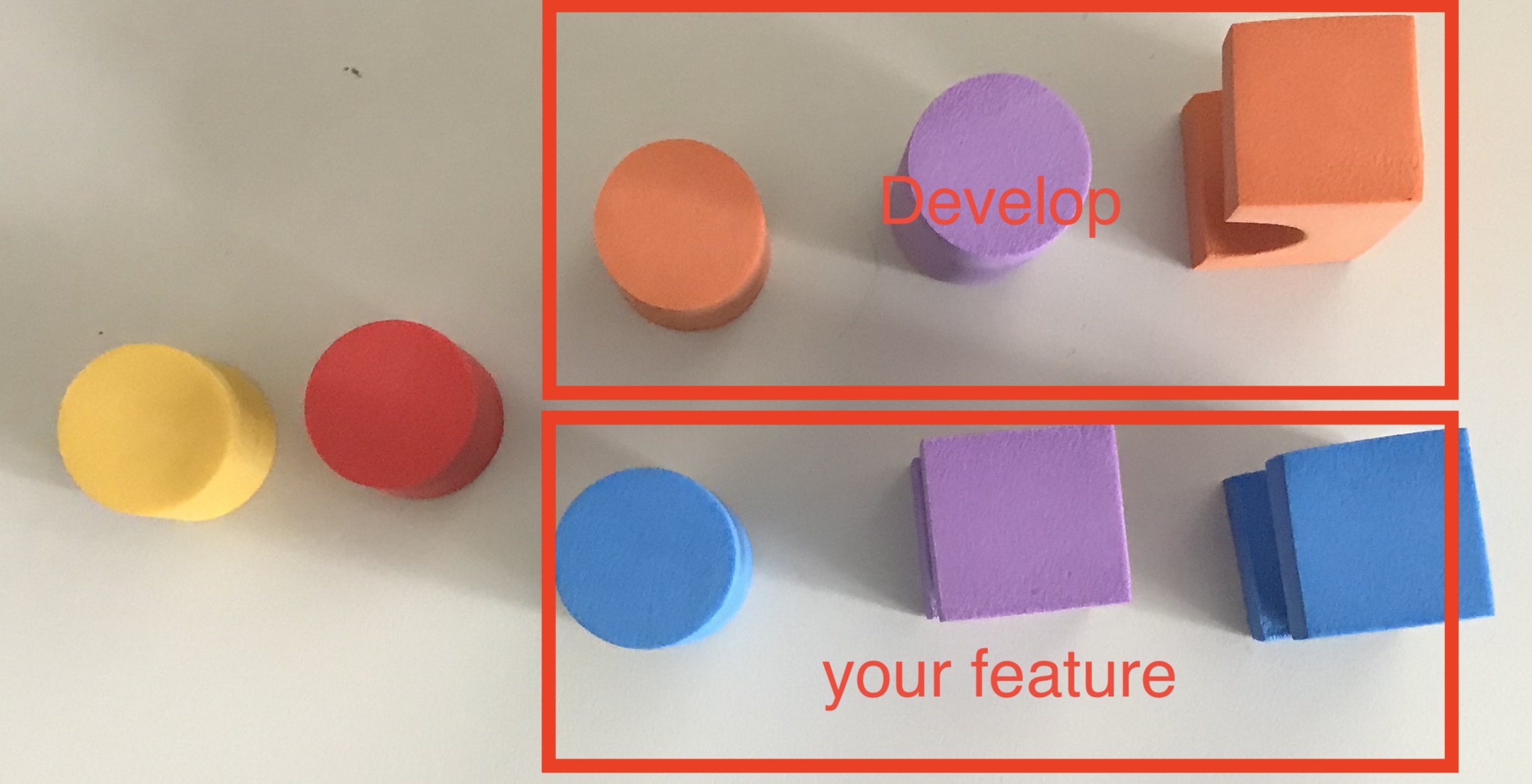 Again, in this example, several commits have been added to develop since we created our branch:

Rebasing your branch from develop applies your changes onto the end of the changes on the develop branch:

Now your feature has all of the stuff in the develop branch followed by all the changes you made in your feature branch.

At the end, when you merge your feature branch into the develop branch, it will generate a merge commit but there won't be any merge conflicts to deal with.

What is a rebase?

If you change the order of the commits in the file, it will change their order in history.

When not to rebase

Because git rebase rewrites history, do not rebase if someone else has pulled your branch down, unless they specifically ask you to (and they know what they are doing). A rebase will force them to fix up their copy of the repo which can be fraught with danger.

Escape hatch when everything goes wrong

If you get stuck during a rebase, the following command will get you out of trouble and allow you to start again:

If you rebase and you lose one of your changes, you can find it again using git reflog. It will list all the commits that you have been at recently:

You can then run a git reset to restore that commit. Using the example above, to restore commit 94d2f1dd, run git reset 94d2f1dd.

FYI, Git doesn't fully delete anything until it is older than 30 days and hasn't been referenced.

Escape hatch for everything else

This should sort out any repo that is stuck:

Note: Instead of git add . && git stash save, you can use git stash --all which will take all the staged files as well as any files that you haven't added to the repo before and stash them.

I found git much less intimidating once I found out how it stores files and commits The git book is well-written, free, and not a very long read. It's a great way to spend half an hour and well worth reading.